Will Biden’s Sanctions Halt a Russian Invasion of Ukraine? 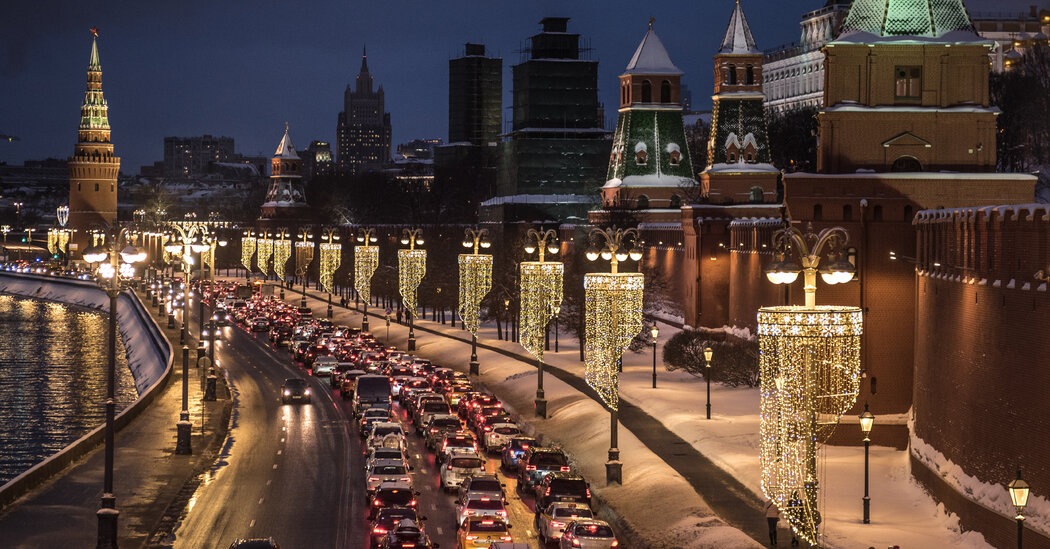 WASHINGTON — When the Obama administration imposed sanctions on Russia for invading Ukraine in 2014, American officials were hopeful they would deter President Vladimir V. Putin from further aggression.

Some of the officials argue today that the sanctions prevented Mr. Putin from ordering Russian forces beyond where they had halted on the Crimean Peninsula and in the eastern Donbas region. But Mr. Putin held on to Crimea, and on Monday he ordered more troops into an insurgent-controlled area of eastern Ukraine where thousands of Russian soldiers have been operating and said the Kremlin was recognizing the enclaves as independent states.

Now, President Biden, who as vice president helped oversee Ukraine policy in 2014, has to weigh what sanctions might compel Mr. Putin to halt his new offensive, which the White House has judged to be an “invasion.” The White House is taking a step-by-step approach, trying to calibrate each tranche of measures to Mr. Putin’s actions.

“I’m going to begin to impose sanctions in response, far beyond the steps we and our allies and partners implemented in 2014,” Mr. Biden said on Tuesday in announcing a new set of sanctions. “And if Russia goes further with this invasion, we stand prepared to go further.”

While American officials have studied the effects of sanctions imposed since 2014 and sharpened techniques, Mr. Putin has had years to make his country’s $1.5 trillion economy more insular so that parts of Russia would be shielded from tough penalties. Speaking to reporters on Friday, he boasted that his country had grown more self-sufficient in the face of “illegitimate” Western sanctions, according to Russia’s Tass news service. He added that in the future, it would be “important for us to raise the level of our economic sovereignty.”

And perhaps most notably, Mr. Putin and his closest aides and partners in Moscow might not suffer much themselves from sanctions, analysts say.

Mr. Putin’s decision on Monday to press ahead with the troop movement suggests that he has concluded that the costs of new sanctions are tolerable, despite U.S. talk of “massive consequences” for his country. Several of his top aides made that point in choreographed speeches to Mr. Putin in a meeting of his Security Council on Monday in Moscow.

If Russian officials are firm in that mind-set, the Biden administration might find it has to impose the absolute harshest sanctions — ones that would inflict suffering on many ordinary citizens — or look for a noneconomic option, such as giving greater military aid to an insurgency in Ukraine. Mr. Biden has said he will not send American troops to defend Ukraine.

Some of the hard-line nationalist men around Mr. Putin were already on a Treasury Department sanctions list and accept that they and their families will no longer have substantial ties to the United States or Europe for the rest of their lives, said Alexander Gabuev, the chair of the Russia in the Asia-Pacific Program at the Carnegie Moscow Center.

“They are the powerful everybodies in today’s Russia,” he said. “There is a lot of posh richness. They’re totally secluded. They’re the kings, and that can be secured in Russia only.”

Furthermore, because of their roles in state-owned enterprises and their business ties, they are “the very guys who are directly benefiting from the economy becoming more insulated, more detached from the outside world,” he added.

They have also adopted a siege mentality rooted in an ideological belief about the United States and its sanctions policies that Mr. Putin regularly pushes. “He says, ‘It’s not because of actions I take, but it’s because we’re rising as a power, and the Americans want to punish us for standing up to hegemonism,’” Mr. Gabuev said. “I think that’s genuine. The bulk of my contacts in the government believe that.”

The sanctions announced by the United States on Tuesday include penalties against three sons of senior officials close to Mr. Putin and two state-owned banks, as well as further restrictions on Russia’s ability to raise revenue by issuing sovereign debt. The costs are not expected to be felt widely in Russia — the two banks are policy institutions and do not have retail operations — but American officials could eventually announce more painful steps.

That announcement followed an executive order issued by Mr. Biden on Monday night that prohibits business dealings between Americans and entities in the Russia-backed eastern enclaves in Ukraine. The Biden administration would also have the authority to impose sanctions on anyone operating in those areas, a U.S. official said.

Britain announced Tuesday that it was freezing the assets of five Russian banks and imposing sanctions on three Russian billionaires and certain members of Parliament. And Germany said it was halting certification of the Nord Stream 2 natural gas pipeline that would connect to Russia.

Officials from the White House, State Department and Treasury Department have spent weeks coordinating a response with European leaders and major financial institutions and say they are able to act almost immediately as Russia escalates its actions.

Some experts say that if the Biden administration follows through on the most severe options that officials have suggested are possible — most notably severing the country’s top banks, including Sberbank and VTB, from transactions with non-Russian entities — Russia could suffer a financial panic that triggers a stock market crash and rapid inflation. The effects would most likely strike not only billionaire oligarchs but also middle-class and lower-income families. Russian enterprises would also be unable to receive payment for energy exports.

Besides isolating Russian state-owned banks, the escalatory sanctions that U.S. officials have prepared would also cut off the ability to purchase critical technologies from American companies.

If the United States imposes the harshest penalties, “there will be unexpected and unpredictable consequences for global markets,” said Maria Snegovaya, a visiting scholar at George Washington University who co-wrote an Atlantic Council paper on U.S. sanctions on Russia.

Mr. Fishman said the administration’s move against one of the two targeted banks — VEB, the country’s main development bank — was the first time the United States had fully cut off a state-owned Russian financial institution. “I interpret that as a warning that the Biden administration is prepared to cut off other major Russian banks from the U.S. financial system,” Mr. Fishman said.

“Biden is giving Putin an opportunity to step away from the brink,” he added. “But he’s also signaling that, if Putin unleashes a full-scale war, the economic costs will be immense.”

A severe economic disruption could test Mr. Putin’s control of his country. But many analysts are skeptical that the United States and its European allies will follow through with the toughest options that they have considered, as they may be discouraged by fears over collateral damage to their own economies.

And no Western officials have even proposed choking the lifeblood of Russia’s economy by cutting off its lucrative energy exports. Experts say that a move against Russian energy revenues would have the biggest impact, but that it would also lead to a precarious political situation for Mr. Biden and other world leaders as oil and gas prices rise in a period of high global inflation.

The Russian government has spent years trying to reconfigure its budget and finances so that it can withstand further sanctions, efforts that have been aided by high market prices for oil and gas. It has relatively low debt and relies less on loans from foreign entities than it did before 2014. Most importantly, the central bank has accumulated foreign currency reserves of $631 billion, the fourth-largest such reserve in the world.

Some important Russian state-owned enterprises and private companies have actually benefited from U.S. sanctions. Kremlin policies aimed at replacing Western imports with Russian and non-Western products wind up raising the profits of those businesses. And some of Mr. Putin’s allies and their families have done well under the initiatives. One example is Dmitry Patrushev, the minister of agriculture, whose family has become wealthier from new agriculture industry policies, Mr. Gabuev said.

President Xi Jinping of China, who has been strengthening his nation’s ties with Russia, could help Mr. Putin get around some of the sanctions or bolster Russia’s economy with greater energy purchases. When the two leaders met in Beijing at the start of the Winter Olympics, their governments announced a 30-year contract in which China would purchase gas through a new pipeline running across Siberia. Chinese companies might also be able to fill some of the supply chain gaps created by a stoppage in certain U.S. technology exports to Russia, though those companies are unable to replicate more advanced American products.

Chinese leaders would probably be careful about having its large state-owned banks continue to do business overtly with any Russian banks that are under U.S. sanctions, but China has ways to keep some transactions hidden.

“They’ve developed a lot of e-payment and digital workarounds,” said Daniel Russel, a former assistant secretary of state for East Asian and Pacific affairs and an executive at the Asia Society. “There are all kinds of fairly sophisticated barter systems they’ve been employing. Thirdly, they can hide behind a lot of black market stuff.”