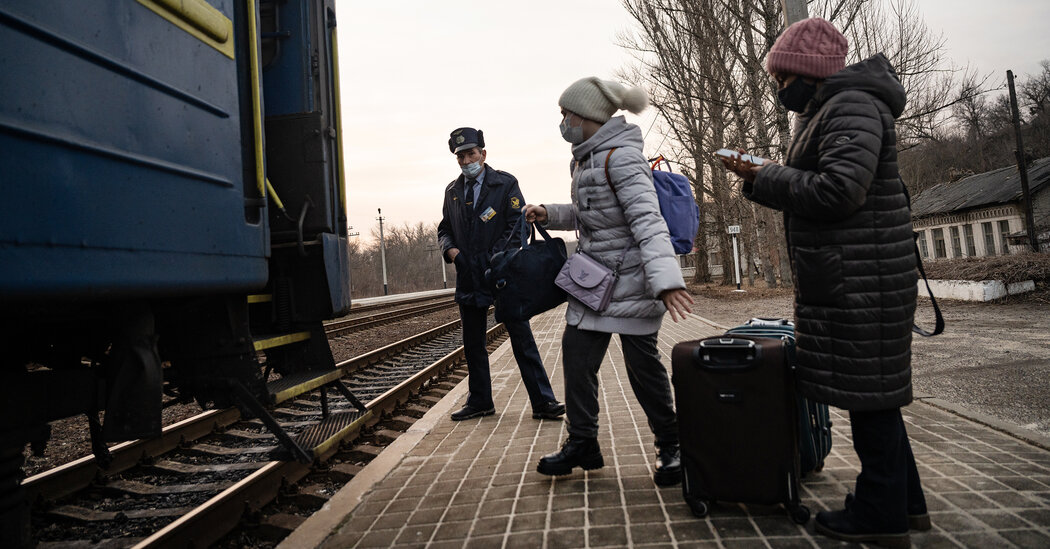 SEVERODONETSK, Ukraine — For days, Viktoria Gudyatskaya listened nervously as the escalating fighting along the front lines in eastern Ukraine approached her home in the town of Novoaidar. The thrumming booms of shelling became so insistent that on Tuesday Ms. Gudyatskaya decided to take her teenage daughter and flee.

“We can hear it now through our closed windows,” she said from the platform at the ramshackle station in Severodonetsk, near her hometown, as she and her daughter prepared to board an early morning westbound train to Kyiv.

For nearly a decade, violence has defined life for the residents of this pocket of eastern Ukraine, where Russian-backed separatists have carved out two enclaves and waged a steady skirmish with Ukrainian soldiers on the other side of the conflict line. But the decision announced by President Vladimir V. Putin of Russia on Monday night to recognize the two separatist enclaves as independent republics — and to order in Russian troops as “peacemakers” — has suddenly brought new and pressing peril to an already fraught region.

On Tuesday morning, shelling between the separatists and Ukrainian forces was continuing at different locations along the contact line, as uncertainty about what the Russians would do forced remaining residents to decide whether to stay or go.

As dawn broke over the Severodonetsk train station, about a dozen or so people stood on the concrete platform to board the westbound train. It was not a scene of panic, yet, but one of weary resignation. Mothers had stuffed clothes into plastic trash bags or pulled dirt-stained roller bags. They said they were leaving to escape the violence that might be coming.

For Ms. Gudyatskaya, who had already been planning to leave, the angry speech by Mr. Putin accelerated her timetable. She didn’t want to wait to find out how much new fury the Russian president might bring.

“It felt like he took a decisive step,” said Mr. Gudyatskaya, as she stood with her daughter, Svetlana, 14, who plans to live with a brother in Kyiv “until the situation clears up.”

President Volodymyr Zelensky delivered a televised speech at 2 a.m. to urge calm, saying that the country would “keep a cool head” in the crisis. But he also said that Ukraine would not yield territory. “We are on our own land,” he said. “We are not afraid of anything or anyone. We owe nothing to anyone and will not give anything to anyone.”

Hours later, Ukraine’s defense minister, Oleksiy Reznkiov, warned of “difficult challenges ahead” in an address to military officials on Tuesday morning. “There will be losses,” he said. “We will have to endure pain, overcome fear and despair. But we will definitely win.”

From Moscow, Mr. Putin had asserted in his speech that Ukraine had been “created by Russia” and should be part of it today, suggesting a claim to the entire country. But he was ambiguous about a key question on whether his order to deploy forces into the separatist areas would presage a wider attack on Ukraine. The two enclaves, the so-called Donetsk People’s Republic and Luhansk People’s Republic, claim about three times as much territory as they currently control.

If Russia backs those claims, which extend deep into Ukrainian territory, including to the chipped concrete-tile train platform the families were departing from on Tuesday, the Ukrainian government will be forced to acquiesce or face a possible war with Russia.

The territory claimed by the two entities outside the area they now control is home to about 2.5 million people. A flow of internally displaced people to the west is another possibility, though there was no immediate sign of a large-scale movement on Tuesday morning.

But the intensifying violence is taking a heavy toll. On Monday, only hours before Mr. Putin spoke from Moscow, a dozen mortars exploded in the village of Vrubivka, as terrified residents cowered in basements, capturing their horror on video.

“It’s the fourth or fifth incoming,” said Iryna Yarmolenko, 53, as explosions rang out above. “Oh, dear mother, what should I do? It’s coming in. A lot is coming in.”

With a high-pitched whistle, an explosion and the sound of breaking glass, a mortar then hit near her building. Ms. Yarmolenko, who was not harmed, shared the recording with a Times reporter.

Outside, the poplar trees lining the nearby street were decimated, a tableau of sheared branches, craters and broken glass.

“What is there to describe? Shootings, explosions, the plaster fell off the ceiling, the smell of gunpowder,” said Kristina Makarenko, 24, who had also waited in a basement with her two sons, Timur, 7 and Anton, 2. “How should I know why this is happening. They have cockroaches in their heads. They are idiots on both sides, here and there.”

In the dank space, with a dirt floor, illuminated by a bare bulb, the boys played video games on their phones. “The ceiling fell in and we ran to the basement,” Timur said of how his day had begun on Monday. “We ran and ran.”

The situation was no better on Tuesday. Shelling was fierce at the frontline town of Shchastya, where a coal-fueled electrical power plant was hit and caught fire, sending up clouds of smoke. The plant’s owner, DTEK, said employees were evacuated to a bomb shelter.

Without power, running water or heat, residents fetched plastic buckets of water from a well on the edge of town.

“Who could say this isn’t scary?” said Valentina Tsaruk, 55 a retiree, toting a pail of water from the well. “Look at all these negotiations with the Europeans. It came to nothing. I think they just abandoned us. That’s what I think.”

She said she didn’t want to live in the Luhansk People’s Republic, but said the explosions and gunfire ringing out every minute or so on the edge of town was a sign she might be doing so soon.

“You live not knowing what will happen tomorrow, or 10 minutes from now,” she said.

For Ms. Gudyatskaya, standing at the train platform on Tuesday morning, there was no longer any question where she should would run with her daughter — away, to the west. She directly blamed Mr. Putin for her predicament. “If they had another leader, they wouldn’t do this,” she said of the Russians. “The Russian people are fine.”

Svetlana, her daughter, who toted a backpack with rainbow-hued straps and said she wanted to become either a car mechanic or a nurse, said she wasn’t as worried as her mother.

“Everything is fine,” she said as she boarded the train. “Our guys will win. We will defeat Russia and Russia will fall apart.”

Viktoria shook her head. “Faith is always good, Sveta,” she said. “But I am worried.”