Voting Rights Tracker: What to Know About the U.S. Elections Fight 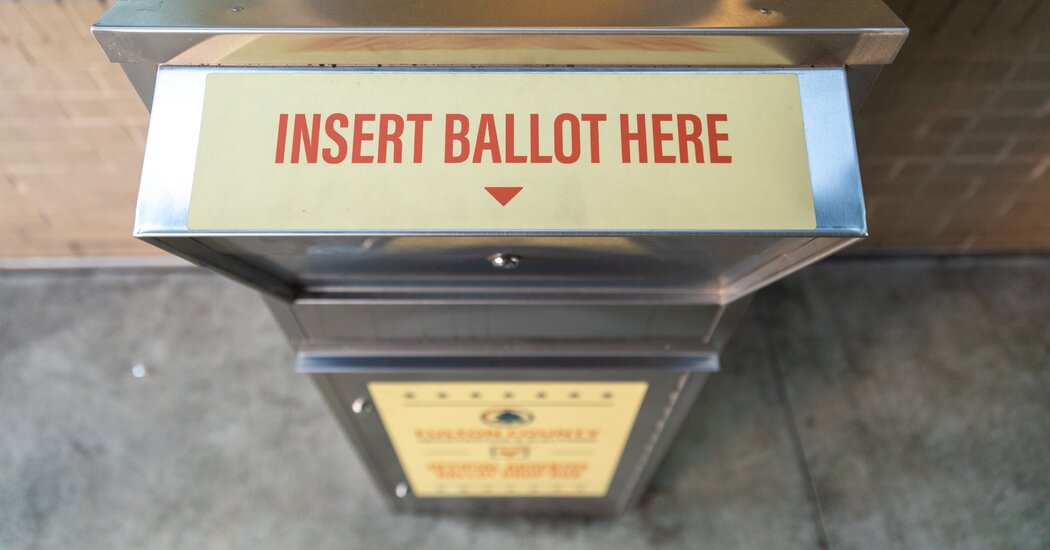 The current battle over voting rights — who gets to vote, how votes are cast and counted, who oversees the process — has turned what was once the humdrum machine room of United States democracy into a central partisan battlefield with enormous stakes for the future of American democracy.

Since the 2020 election, and spurred in large part by former President Donald J. Trump’s oft-repeated lie that a second term was stolen from him, the Republican Party has made a concerted new effort to restrict voting and give itself more power over the mechanics of casting and counting ballots.

In 2021, Republican-led legislatures in dozens of states enacted wide-ranging laws overhauling their election systems, and G.O.P. lawmakers are planning a new wave of such laws in 2022.

Here is a quick rundown of those efforts, Democratic pushback and why it all matters.

Why are voting rights an issue now?

The 2020 election saw a sea change in voting habits. Driven largely by the pandemic, millions of Americans embraced voting early in person and voting by mail.

Forty-three percent of voters cast ballots by mail in 2020, making it the most popular method, and 26 percent voted early in person, according to the Census Bureau. Just 21 percent voted on Election Day.

Democrats in particular flocked to the two forms of early voting, far outpacing Republicans in some states — a trend that raised alarms among Republicans.

Mr. Trump denounced voting by mail for months during the campaign. Once defeated, he attacked mailed-in ballots in hopes of overturning the election’s result.

Since then, Republican-led legislatures have justified new restrictions on voting by citing a lack of public confidence in elections.

What are Republicans trying to do?

Republicans have often sought to limit absentee-ballot drop boxes by claiming without evidence that they are susceptible to fraud. Other new laws tighten identification requirements for voting by mail, bar election officials from proactively sending out ballot applications or shorten the time frame during which absentee ballots can be requested.

Some legislatures have also taken aim at how elections are overseen, stripping election officials like secretaries of state of some of their powers, exerting more authority over county and local election officials or pursuing partisan reviews of election results.

Why are these legislative efforts important?

They have fueled widespread doubts about the integrity of American elections and brought intense partisan gamesmanship to parts of the democratic process that once relied largely on orderly routine and good faith.

Some are also likely to affect voters of color disproportionately, echoing the country’s long history of racial discrimination at the polls, where Black citizens once faced barriers to voting including poll taxes, literacy tests, intimidation and impossible hurdles, like guessing the number of butter beans in a jar.

The newest restrictions are not so draconian, but could have outsize effects in racially diverse, densely populated areas. In Georgia, the four big counties at the core of metropolitan Atlanta — Fulton, Cobb, DeKalb and Gwinnett — will have no more than 23 drop boxes in future elections, down from the 94 available in 2020.

The stakes are enormous: In battleground states like Georgia and Arizona, where the 2020 presidential margins were less than 13,000 votes, even a slight curtailment of turnout could tilt the outcome.

Are there more extreme efforts?

Yes. In Arkansas, Republicans enacted new legislation that allows a state board of election commissioners — composed of six Republicans and one Democrat — to investigate and “institute corrective action” when issues arise at any stage of the voting process, from registration to the casting and counting of ballots to the certification of elections.

In Texas, Republicans tried to make it easier for the Legislature to overturn an election, but were held up when Democratic lawmakers staged a last-second walkout, and later dropped the effort.

Many of the most extreme bills have not made it past state legislatures, with Republicans often choosing to dial back their farthest-reaching proposals.

How are Democrats pushing back?

Through Congress and the courts, but with limited success.

In Congress, Democrats have focused their efforts on two sweeping bills, the Freedom to Vote Act and the John Lewis Voting Rights Advancement Act. But Republicans in the 50-50 Senate have blocked both. That leaves many Democrats pressing for a change to the Senate’s filibuster rules, but some moderates, including Senator Joe Manchin III of West Virginia, are opposed.

The Justice Department has filed lawsuits challenging Republican voting laws in Georgia and Texas, and has also doubled the size of its civil rights division, which oversees voting litigation.

Still, any major judicial ruling on a recently enacted voting law is unlikely to arrive before the 2022 elections.

Can the courts do anything about voting laws?

Yes — but far less than they once could.

The Supreme Court has greatly weakened the Voting Rights Act over the last decade, deeply cutting into the Justice Department’s authority over voting and giving states new latitude to impose restrictions.

Voting-rights advocates can still challenge voting laws in federal court on other grounds, including under the 14th and 15th Amendments. They can also cite state constitutional protections in state courts.

Wait, back up. What is the Voting Rights Act?

Passed in 1965, it was one of the most important legacies of the civil rights movement. It contained several provisions protecting the right to vote; required states with a history of discrimination at the polls to obtain clearance from the Justice Department before changing their voting laws, and banned racial gerrymandering and any voting measures that would target minority groups.

The Voting Rights Act set off a wave of enfranchisement of Black citizens, with more than 250,000 registering to vote before the end of 1965.

But the law was hollowed out by a 2013 Supreme Court decision that lifted the requirement for preclearance, paving the way for many of the restrictions enacted in 2021.

Where does President Biden stand?

He did not mince words, warning in July that “there is an unfolding assault taking place in America today — an attempt to suppress and subvert the right to vote in fair and free elections.” He called it “the most significant test of our democracy since the Civil War.”

But in his first year, he did not make voting rights a top priority. As his administration battled to pass infrastructure and economic-relief programs, voting rights groups have grown frustrated, calling for a more aggressive White House push on federal voting legislation.

Which states have changed their voting laws?

Nineteen states passed 34 laws restricting voting in 2021, according to the Brennan Center for Justice. Some of the most significant legislation was enacted in battleground states.

Some states, however, have expanded voting access. New Jersey and Kentucky added more early-voting days and an online registration portal. Virginia created a state-level preclearance requirement and made Election Day a holiday, and New York restored voting rights for some felons.

So, will these new voting laws swing elections?

Maybe. Maybe not. Some laws will make voting more difficult for certain groups, cause confusion or create longer wait times at polling places, any of which could deter voters from casting ballots.

In some places, the new restrictions could backfire: Many Republicans, especially in far-flung rural areas, once preferred to vote by mail, and making it more difficult to do so could inconvenience them more than people in cities and suburbs.

The laws have met an impassioned response from voting rights groups, which are working to inform voters about the new restrictions while also hiring lawyers to challenge them.

Democrats hope that their voters will be impassioned enough in response to the new restrictions that they turn out in large numbers to defeat Republicans in November.